I'm really not sure how it got to be September. Didn't I just write about being bloated? I got my results back and it turns out I did have candida overgrowth.

Soooooo much has happened since I last wrote. In later July my hubby and I went on vacation to a beach area. I'm pretty sure I spent more time outside that week than I'd spent in the last few years. I really hate sunburns and I had no desire to get a tan, so I used LOTS of sunscreen. Despite my best efforts, I still managed to get a little bit of a tan.

No big deal, right? Ha! It's me we're talking about.

A few days after getting back home, I started to develop a rash on my forearms. What was different about this rash was that it seemed to be spreading only to areas that I got the most sun. I went to my allergist's office and saw her physician's assistant. I told him I was concerned that I was having some sort of photoallergic reaction. He didn't think that was likely (because such reactions are very rare), and he tried to convince me that it was heat rash. Um, heat rash happening days later? Only on the most sun-exposed areas? Sure.

The rash started to spread and eventually covered my the back of my hands, outside of my arms (up to a short sleeve line), part of my neck, and an area shaped like a V on my upper chest imagine the shape of a a V-neck shirt). I was uncomfortably itchy.

I decided to take matters into my own hands, so I got online to find out what kinds of medications can cause photoallergic reactions. It turns out that pretty much anything can cause a photoallergic reaction in someone; however, certain medications are more common than others. Sunscreen is a common culprit, but I ruled out my sunscreen because the rash was not going away even though I was no longer using the product.

At some point I discovered that birth control pills can cause photoallergic reactions. Furthermore, the reaction is often delayed -- occurring 42 to 72 hours after sun exposure.

Based on the medical article I found, I decided to stop my birth control pill for a week to see if I started to see improvement. Up until that point, there was no improvement despite high doses of antihistamines and prescription steroid creams. I thought I might not be improving because the birth control was still in my system and my rash areas were still getting exposed to the sun.

My allergist (not the physician assistant that I saw) called to check on me because she was reviewing charts. She was especially interested in my case because I was the patient she saw last year who had an extremely rare anaphylactic reaction to a medication that was not known to cause such reactions. I told her my theories about the birth control pills and she said anything was possible.

Sure enough the rash started to improve quickly a few days after stopping the pills.

It is entirely possible that the timing of the improvement after stopping the pill was a coincidence, but I'm pretty convinced it was a photoallergic reaction because of the strange pattern the rash took -- only appearing on the parts of me that received the most sun. I don't think the rash appeared on my face because I wore a hat and sunglasses every time I went outside in addition to wearing sunblock.

My allergist called to check on me again about a week after her last call, and I reported that the rash was significantly improving. She said that she learned a long time ago in her residency that anything is possible when it comes to side effects of medications. She has also learned with me that I seem to have a talent for developing unusual side effects.

What's interesting is that I am now back on my birth control pills with no problems, probably because I don't spend much time outside. The only sun I get is walking from my car to whatever building happens to be my destination. I don't foresee spending a week in the sun again for a long time, so I don't think I'll be having another reaction any time soon. Besides, I now know I should dress for winter the next time I go to a beach! :)

Update 10/10/2011: I thought I'd add a photo of the the rash. This is a picture of my arm. It's hard to see because the quality is not that great (I took the picture with my phone), but if you look closely you can see that the rash is much more prominent on my lower arm. The texture was similar to a really bumpy orange peel. The rash also pretty much disappears at the top of my arm and shoulder where my t-shirt sleeves covered the area. 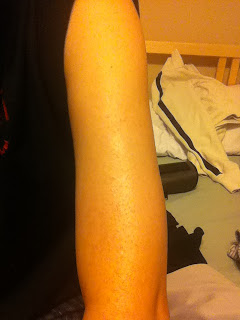 alyson
I'm 35 years old, and I've suffered from a number of chronic illnesses for my entire adult life, including allergies, asthma, eczema, GERD, IBS, ME/CFS, migraines, myopathy (muscle weakness), PCOS, pre-diabetes, and more. Most recently, a rheumatologist diagnosed me with a suspected autoimmune disease due to new symptoms and put me on Plaquenil. I started this blog when I was 30 years old with the intention of sharing my thoughts and experiences to help people better understand the challenges of living with chronic illness, particularly ME/CFS – something I was diagnosed with when I was 26, though I'd been sick for several years before that. When I was at my sickest I was bedridden, and there were times I had to be pushed in a wheelchair. Fast forward to today, and much has changed. Though not yet "normal," I am now the healthiest I've been in my entire adult life. The biggest changes in my lifestyle have involved eating a gluten-free, dairy-free diet and taking 400mg of CoQ10 twice a day. This blog chronicles my quest for answers and the ups and downs along the way. Please feel free to post questions or comments or share my blog with others. Thanks for visiting!

Volunteer for Research (in alpha order)