WARNING: Some people may find the pictures in this post too graphic because they show needles in my arm.  See Part I and Part II for background on this post.

What should have been a simple UTI turned out to be a two and a half week adventure. The doctor(s) at the hospital decided that instead of oral antibiotics, I needed to have five more days of intravenous (IV) antibiotics.

WHAT?!  That's a seriously serious treatment.

In the end, I think my diagnosis was pyelonephritis, which usually means the infection has reached the kidneys.  Though the CT scan of my kidneys (and surrounding area) was clear, the Attending Physician (the doctor in charge of the Resident doctors who had been caring for me) explained that she was concerned the infection was working its way to my kidneys -- which is probably why I was experiencing a cramping pain in my lower back.  She also did not like the way I had not responded to all the oral antibiotics...thus, the IV antibiotics.

She said a nurse would come to my house to teach me how to administer my own IV treatments and let me do it on my own if I felt comfortable.  If I didn't feel comfortable, the nurse could come back every day to help.  Wow.  It was a lot to take in.  Having a nurse go to a house to administer IV antibiotics seemed like something only really sick people have happen.

As a parting gift from the hospital, I got to keep my peripheral IV line (i.e, an IV needle in my arm) so that I didn't have to get stuck with a new needle every day (see photo below).  Notice the fashionable green and white striped hospital gown sleeve. 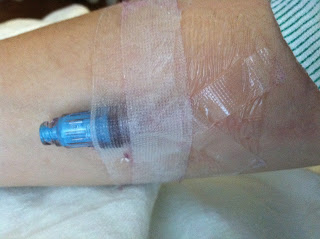 Sure enough, I learned how to administer my own IV antibiotics -- a surprisingly involved process.  It was a little creepy at first, but I could handle it.  The home IV was not like the kind I had at the hospital (you know, with a bag and a pole).  Instead, the medication was packed in a little balloon-like ball that used pressure instead of gravity to move the IV medication through the tubing (see photo below).  ﻿ 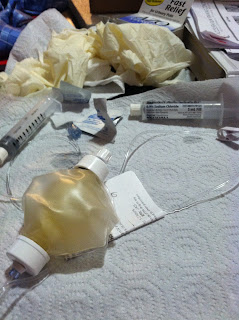 Unfortunately, the IV needle in my arm didn't make it the full five days.  It slipped out of place after a couple of days, so I had to get it removed.  The home nurse tried to insert a new IV, but my veins would not cooperate (or she was not particularly skilled at inserting IV's).  She finally gave up and used a butterfly needle to administer my IV treatment (see photo below).  Because the butterfly needle could not stay in my arm day after day, the nurse had to come back each day to do the rest of my treatments. 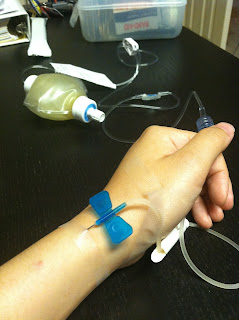 As a result of the myriad of oral and IV antibiotics (and despite my best effort with high doses of probiotics), I ended up with a really fun (that's sarcasm) vaginal yeast infection.  All I can say is thank goodness for prescription antifungal medications.

I am happy to report that I am fully recovered from my first and worst UTI, though I'm now paranoid that I'll get another infection that is just as bad or worse.  Ugh.  Please send my urinary tract good thoughts.  :)
Posted by alyson at 1:09 PM 2 comments:

Email ThisBlogThis!Share to TwitterShare to FacebookShare to Pinterest
Labels: UTI

Having complications of seemingly simple issues seems to be the story of my life.

Obviously, I've given away the ending to my UTI story.

Most UTIs are caused by Escherichia coli (E. coli).  Since I can't seem to do anything the easy way, my infection was NOT caused by the usual bacteria.  Instead, the bacteria I had was an antibiotic-resistant Klebsiella pneumoniae.  And, of course, it was completely resistant to the the antibiotic I had been prescribed (Macrobid/Nitrofurantoin).  See below for my urine culture results:

You'll notice that there is a big R next to Nitrofurantonin, which indicates the bacteria I had was resistant to the antibiotic I had been prescribed.  The reason I did not feel better over the weekend was because my antibiotic was doing nothing!  Fortunately, the urine culture results came in on Monday, so the PA prescribed a new antibiotic that the bacteria was supposed to be susceptible to (and that I was not allergic to).

Unfortunately, I did not feel any better on the new antibiotic (in fact, I was feeling worse; pain had started to spread to my lower back), so I made an appointment with a doctor for that Thursday -- exactly one week after my symptoms started.  The doctor decided that I was not on a strong enough antibiotic, so she changed my antibiotic.  By the following Monday, my symptoms had not improved. I felt a constant cramping feeling in my lower pelvis and back; I was nauseated and running a 100-degree temperature.  By now, I'd been sick for about a week and a half.

I called the doctor's office, and they instructed me to go to an Emergency Room rather than come into the office.  The ER?  I felt awful, but I didn't feel THAT sick.  Oh well, what could I do but follow the doctor's orders.  And just like that, my very first UTI became my very worst.

As my husband was driving me to the Emergency Room, I commented to him that I hoped we'd be back home in time for dinner.  I figured the ER would give me some IV antibiotics and send me home that day with a new prescription.  No such luck.

While in the hospital, I had a CT of my abdomen and was poked and prodded by numerous doctors (Residents) throughout the night.  I had multiple blood tests, a urine test, and two IV antibiotic treatments over the course of 24 hours.  The hospital I happened to be in was a teaching hospital, so I also kept having to repeat my medical history over and over.  I got very little sleep during my stay (my snoring roommate didn't help).  I was glad that I would be going home after just one night.

Before I could leave the hospital, the Attending Physician (i.e., the senior doctor in charge of the Residents) had to review my case.  I assumed I would be prescribed some sort of antibiotic to take home.  I was right, but I was surprised by the prescription.

I'll write more about my unusual prescription in my next post.

Email ThisBlogThis!Share to TwitterShare to FacebookShare to Pinterest
Labels: UTI

WARNING: I include some medical-related descriptions that sensitive people might find graphic. Read at your own risk!

Peeing blood is probably one of the most disturbing symptoms I've ever experienced. It's not the most painful or dangerous I've had, but there's no mistaking that something is going wrong with the body.

It all started the evening of Thursday, August 2. I made a pre-bedtime trip to the toilet and did my business. My bladder felt a little weird (not painful, just different) when I went, but I didn't think much of it.

Less than 30 minutes later, I felt the urge to pee again. I tried to go, but very little came out, and what little came out seemed to cause some odd cramping in my bladder. I looked down at the toilet paper after wiping and noticed that it had pink on it -- almost like diluted blood. It wasn't my period, so I was a bit concerned...but I also thought it could have been something I had eaten.

The next morning I did my business again, and had a stronger cramping and discomfort and again found pink on the toilet paper. This time I was almost positive it was blood. I quickly got an appointment for that Friday morning with a Physician's Assistant (PA) at a local clinic.

I had never had a urinary tract infection (UTI) before, but I was pretty sure this had to be one. When I gave my urine sample at the clinic, I gasped when I saw what was in the cup. It was dark with blood, and this time there was red (not pink) on the toilet paper when I wiped. When the results of the urinalysis came back, there was no doubt I had an infection. Following are my urinalysis results (comments indicate abnormal result):

The PA agreed that I had a UTI and prescribed an antibiotic and phenazopyridine (for the pain and cramping...it turns pee orange).  As I am allergic to the entire quinolone class of antibiotics (e.g., Cipro, Levaquin, etc.), she prescribed Macrobid (generic: nitrofurantoin).  She then said she was going to send my urine sample to a lab to for a bacterial culture to determine what type of bacteria I had and if it was resistent to any antibiotics.  Doing the culture would ensure I was given the correct prescription.

I filled my prescription on my way to work and didn't think too much about the culture.  I figured I'd feel better in a day or two...but I didn't.

alyson
I'm 35 years old, and I've suffered from a number of chronic illnesses for my entire adult life, including allergies, asthma, eczema, GERD, IBS, ME/CFS, migraines, myopathy (muscle weakness), PCOS, pre-diabetes, and more. Most recently, a rheumatologist diagnosed me with a suspected autoimmune disease due to new symptoms and put me on Plaquenil. I started this blog when I was 30 years old with the intention of sharing my thoughts and experiences to help people better understand the challenges of living with chronic illness, particularly ME/CFS – something I was diagnosed with when I was 26, though I'd been sick for several years before that. When I was at my sickest I was bedridden, and there were times I had to be pushed in a wheelchair. Fast forward to today, and much has changed. Though not yet "normal," I am now the healthiest I've been in my entire adult life. The biggest changes in my lifestyle have involved eating a gluten-free, dairy-free diet and taking 400mg of CoQ10 twice a day. This blog chronicles my quest for answers and the ups and downs along the way. Please feel free to post questions or comments or share my blog with others. Thanks for visiting!

Volunteer for Research (in alpha order)